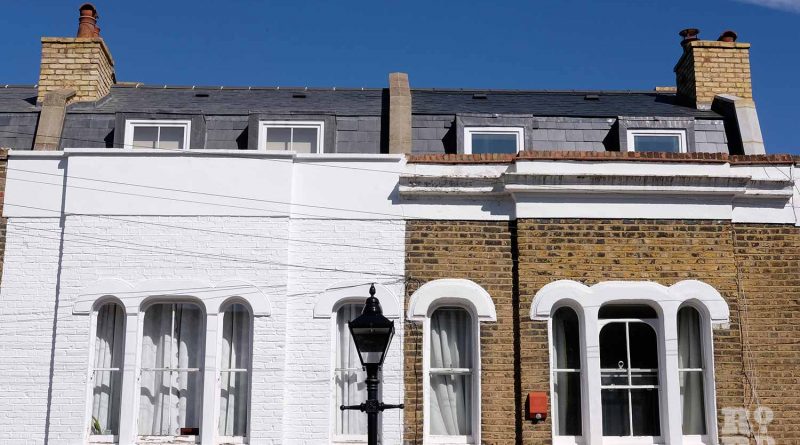 It seems hard to believe that the shape of a roof can make much difference on the economics of an area. But mansard roofs have an impact, and they’re on the rise; we spoke to local estate agent Look Property to get the low-down on how mansard roofs are changing Bow.

What is a mansard roof?

Originating in France and popularised by classical architect François Mansart, a mansard is a roof with four steep side sloping downwards in a way that creates enough space for another floor inside.

They date all the way back to the 16th century in France, and grew popular in Britain in the 18th century, but in London, the classic terraced look doesn’t usually feature a mansard roof.

In Bow the terraces running along many of our streets date back to the early Victorian times, some of them even Georgian, and feature the ‘butterfly’ or ‘valley’ roof style. These are so prevalent in the Big Smoke that they are also known as ‘London’ roofs.

However, with London’s population growing all the time, there is increasing pressure for these historic terraced houses, originally two-up and two-downs, to provide more space. Some owners have gone down to create space in the basement, others have converted their side-return into larger living and kitchen areas. Another solution is to create a new storey in the roof – a space-conserving hat atop the classic Georgian butterfly roofs. A mansard.

A mansard roof will cost upwards of £65,000, according to local independent estate agent Look Property’s director Martyn Stables, and will typically accommodate a double bedroom with ensuite bathroom, and offer 30-35 extra square metres to a house in Bow. This is considerably more affordable and less disruptive than moving to a larger house, which for many homeowners may mean moving out of the area.

Providing more space than a side-return and at half the price of a basement conversion, a mansard roof may seem the perfect solution for homeowners’ housing needs. However until recently the mansard roof has been outlawed in Bow, on heritage grounds. Only in 2017 did new planning rules allow mansards to be built in Bow’s conservation area, but there are strict conditions that need to be met for a planning application to be successful.

We spoke to local mansard roof expert Martyn Stables from Look Property about the chequered history of mansard roofs in Bow, the arguments for and against, and just how hard it is to get planning permission approved.

The chequered history of mansard roofs in Bow

Among the Conservation Areas of Tower Hamlets, three in the Roman Road area of Bow are Medway, Driffield and Roman Road Market. Development regulations are stricter within these borders to preserve what little remained of the original Georgian and Victorian terraces, dating back from 1820 to 1890, that survived the Blitz.

However, following a successful campaign by former Bow West Councillor Joshua Peck to allow mansard roofs into the Conservation Areas, planning laws were reversed, and in 2017 mansard roofs were once more permitted, albeit under strict conditions.

Since then, local residents have seen over a dozen mansard roofs appearing behind scaffolding, and there are dozens more in planning.

The economic benefit of of mansard roofs

To some the mansard roof is a welcome solution to housing needs that will help regenerate the area. To others it is a product of gentrification that will price people out of the area.

Stables agrees that this is a delicate balance, but argues that mansard roofs are just one element of the area’s housing needs. ‘This is part of a wider picture of need in the area,’ said Stables. ‘New builds and affordable housing are also essential to help relieve the pressure on housing, but mansard roofs are one of the best ways of increasing housing stock while respecting the local heritage in Bow’s conversation areas’.

When the terraces around Roman Road were built, they were small two-up two-down houses housing local factory workers and their families in cramped conditions. Society has changed and these small workers’ cottages don’t offer the space needed for today’s families, who are then forced to move to find the living space they need.

‘Mansard roofs mean many families now won’t have to move out of the area to get a larger house,’ Stables said. ‘With a mansard roof, it can make the difference between a two-person house share and a four bedroom family house. Now, growing families are able to stay and spend their money in our local economy rather than moving to another.’

In the same way, ‘shop-and-uppers’ on Roman Road, that once housed the tradespeople selling in the ground floor shops, now provide space for flatshares. With a mansard roof, they could house families.

Additionally, in the short term, Stables adds, the mansard roof is creating a mini-construction boom in the local area, ‘providing jobs for local builders, material designers, interior products… all kinds of things.’

The social benefit of mansard roofs

Bigger families living in Bow means more wealth flowing through the local economy, but there is also benefit on a social level to having a family-centric housing situation. As families grow bigger, they don’t need to move away to get more space, so people are able to stay in the area they have always lived in, providing greater continuity.

Children won’t have to move schools and leave behind their friendship circles for the sake of a new house with an extra bedroom. Generations can forge their roots and hold onto their ties in the East End without being pulled away.

One of the nice things about Bow is that despite its evolution over the decades, it is still home to generations of people born and bred around Roman Road. This shared experience is what makes our community special. Today’s children might still buy pastries from Percy Ingle on their way to school as their grandparents did before them. Mansard roofs may be one piece in the puzzle that will help maintain the century-spanning community.

The architectural benefit of mansard roofs

The Council’s historic position has been anti-mansard, with good reason.  Waves of economic renewal and the decimation of the Blitz means streets of pristine, uniformed terraced housing are now incredibly rare, not just in Tower Hamlets, but in the wider London area too. Maintaining the oldest patches in the quilt is important to honour the centuries that contributed to the city we know and love today.

But are we at risk of preserving parts of London into museum relics at the expense of our housing needs? Supporters of the mansard addition argue that the discreet design of these roofs are the most sympathetic way to increase space in our historic housing. At eye level, mansards are hard to spot, with windows just visible above the crests.

Increasing the capacity of our existing terraced housing means the need for fewer sky-high tower blocks that would blight the skyline, added Stables.

What you need to know about getting a mansard roof

With questions in the application asking for detailed understanding of the local scene, arguments about how the planning proposal would be in keeping with the existing aesthetic feel, it looks like an exam paper. Even if you decipher the planning application, getting your head round all the regulations is the next struggle.

‘The regulations on mansard roofs imposed by the Council can be off-putting’ explained Stables, ‘but there are essential to keep the period aesthetic that people value about Bow’s Conservation Areas.’

For butterfly roofs, development has to keep the classic V shape at the back. Chimney stacks must be retained even if they are non-functional. Original parapets have to stay. Traditional materials must be used and should complement the original historic fabric. Windows in the mansard roof should be  ‘visually subordinate to the main windows’ by being ‘smaller and simpler’.

Period features like terracotta details or iron railings should not only be respected, but even reinstated, to make a building meet the aesthetic requirements.

Going to the right planning consultant, with knowledge and experience of Tower Hamlets’ planning strict policies on mansard roofs, will be key to getting your planning application approved first time round.

Anticipating the demand for mansard roofs following the relaxation of the planning rules in 2017, Look Property were one of the first local estate agents to offer a full-service package to local homeowners.

‘Through our engagement with the local authority during the public consultation and our own experience with our planning applications and development experience, we can add what we have learned to more typical advice that you might expect from an estate agent,’ Stables said.

‘People ask us things like “how much value would be added by adding a mansard roof in my street? What type of rooms add the most value? What additional rental income would it potentially generate? Would we add value simply by obtaining planning consent? Subtracting the cost of the work, how much equity might we add to the value of our property?”’

Look Property offers a network of local experts to help homeowners throughout the process. Among these is Rivington Street Studio architects, who have moved from Shoreditch to Bow and have worked with Look Property for ten years. ‘They currently have planning consent on mansards on Ellesmere Road, 375-377 Roman Road and one on Grove Road, and they are working on others,’ Stables said.

Bow’s landscape reflects its rich heritage. From the ashes of its Georgian and Victorian streets rose utopian post-war housing estates. Now, regeneration of East London has attracted thousands of new residents and with them gated developments and the mansard roof. Good or bad, mansard roofs are set to change the landscape of Bow once again.

For more information about a mansard roof addition to your home, contact Look Property.

Established in January 1990, Look Property is an independent estate agent on Roman Road specialising in residential and commercial sales, letting and management. Look Property offers 30 years of experience in the local market and draws on a network of local professionals including RICS surveyors, architects, engineers, mortgage brokers and every kind or trade.